Bill was asked to speak about his podcast at the UK hosted Photography Show, a photography conference that takes place in September. Like many other conferences, the Covid-19 pandemic forced the show to cancel the in-person event and went virtual. That’s where Woodlot Media stepped in. Bill wanted to produce a video for the virtual event that would tell the story he wasn’t able to in person. We had two weeks, which was a lot for what we could have done, but I and all those involved don’t simply settle for what will get the job done, we put our all into our projects. And with that, 2 weeks would require a big push.

Bill initially brought in myself and our friend Rachel High (producer on Dear Tori). We dug in and looked at Bill’s studio space in downtown Atlanta as the location. It’s a beautiful dilapidated factory building renovated for office space just south of the new Mercedes Stadium. The original flooring, brick, and exposed wood ceiling beams made it an obvious aesthetic choice as well as convenient.

We tasked Bill with writing his script and Rachel and I began discussing crew and the overall scope of what we wanted to do. It was decided that Rachel would be DP and operator and Bill was able to wrangle his long time friend, Kevin Terrell, to be gaffer. Kevin is a union electrician for film and tv and a freelance gaffer. From there, Rachel, in addition to creating the entirety of the shot list and shooting schedule, brought in some friends from other projects for 1st AC (Kayla Martin), Best Boy (Graham Gilley), and Script Supervisor/Teleprompter (Mitchell Germick).

We broke the script down into a chronological story taking place throughout an afternoon, evening, and into the next morning. Bill would go over some of the technical details to recording and hosting a podcast and then go into aspects of finding guests and questioning whether to monetize. We had five setups we had to create to support these topics, one of which needed to appear as if it wasn’t in the same location. Camera support was a combination of Dana Dolly, sticks, and gimbal.

1. Blanket Fort – A mock version of the former podcast space Bill and his co-hosts Steven Wallance and Jordana Russell used in the early days of recording. Affectionately known as the ‘blanket fort.’ 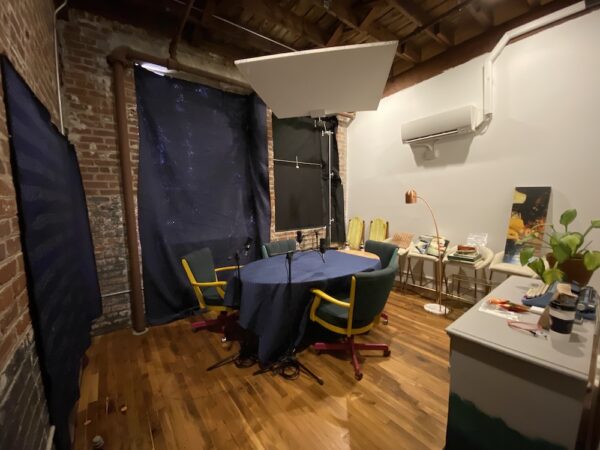 “Blanket Fort” Lighting – A gel’d ellipsoidal is behind the desk that will bounce into the bead board suspended above creating a harsh overhead lighting source similar to flourescent office lighting. 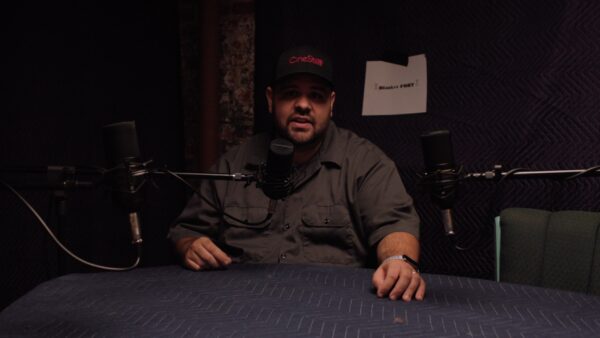 2. The new Podcast area – Afternoon lighting with Bill seated at his desk with computer and mic doing remote interviews. We did most of the how-to and technology of the podcast here. 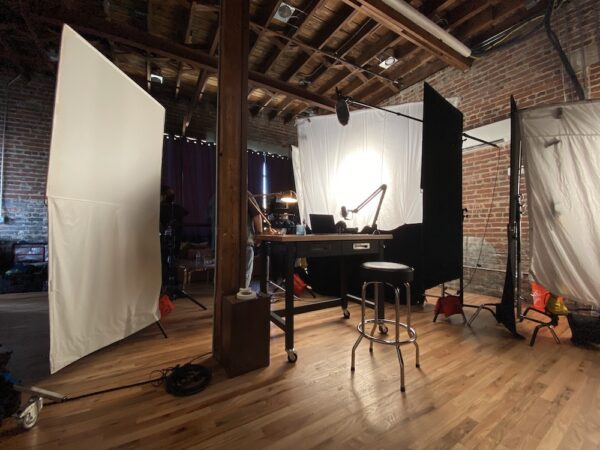 Main Setup – BTS/Lighting – 2x 1k’s, each through grid cloth t-bone’s. One for key, one for background. Two ultrabounce 4×4 floppy’s for fill. 1x softbox with grid crate for hair light. 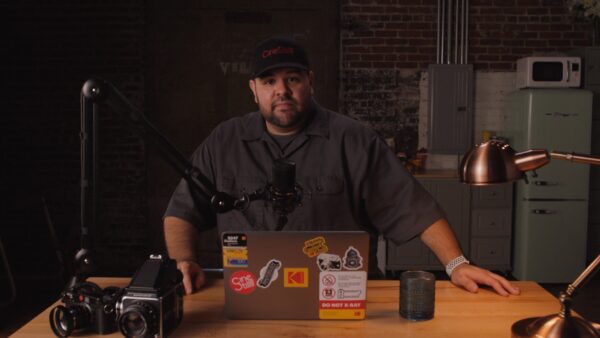 3. Coffee Shop – We used a small corner of the room and dressed it as a coffee shop. Natural light, coffee shop sound fx, and a time-lapse with wait staff completed the effect. We ran a lot of Dana Dolly throughout the shoot. Some to keep the drier content interesting, but also to emphasize more impactful parts of the content, seen here. 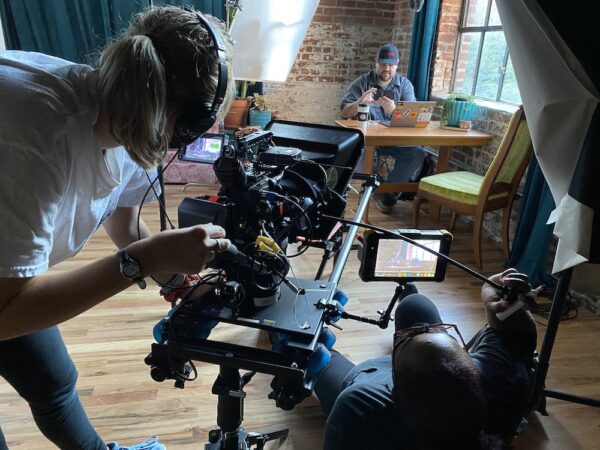 Coffee Shop – BTS/Lighting Setup – Mostly natural, but we put a ultrabounce floppy outside the of the window, camera right as we were losing light fast. A 4×4 frame with opal softens the natural backlight we had from a slit in the curtains. 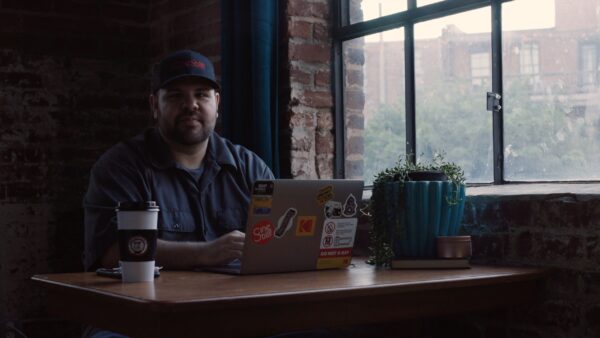 4. Night scene – We opted to shoot this at night, surprise! We were able to schedule this shot for one of the last in the day and ended up with some nice street light accents as well. Since Bill was talking about monetization here, we wanted him to appear small on the couch surrounded by space to emphasize the daunting decision that he as a successful podcast must make. 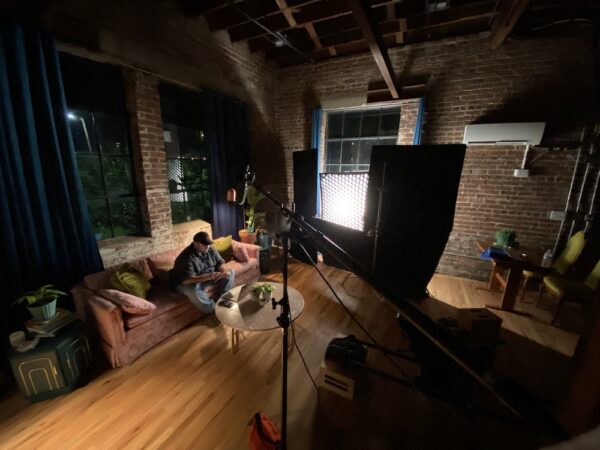 Night Scene – BTS/Lighting – 1k with diffusion, Honeycrate, and floppy’s controlling spill. The key light is motivated by a small brass practical fixture with a tungsten bulb and dimmer. Then we added an ellipsoidal providing some accent lighting on the floor to the left of bill. 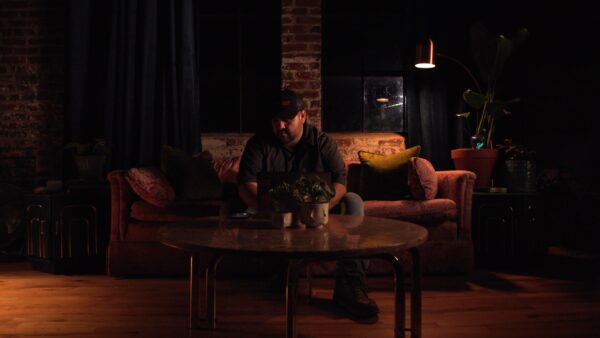 5. Morning Scene – To wrap the story, we made it appear as if Bill stayed up all night working at the office and fell asleep at his desk. He abruptly wakes up and realizes he’s late for the virtual Q/A. We shot this midday and Kevin had to do some creative lighting to make it appear as if it was morning. 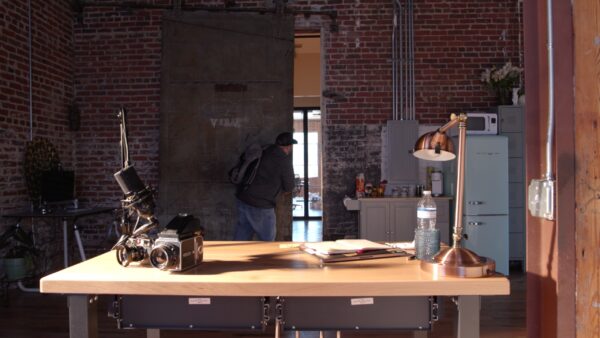