While not a Woodlot production, my freelance work is every bit as important to improving as a filmmaker. With that, an incredible opportunity came up when my cousin, Greg Beck of Two Trees Productions, invited me to Ft. Worth, TX to help him produce his latest short, The Scare (working title). 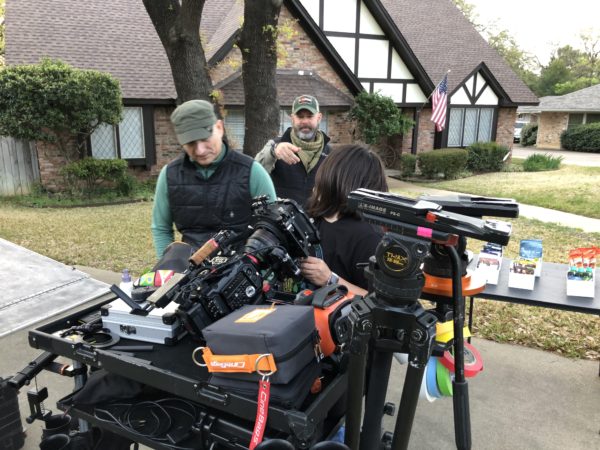 For some background, Greg (in the Shemagh above) and I had been emailing back and forth for about a year bouncing things off each other from contracts to how to do insurance for a small production company. I told him that when he had something come up in the way of production to let me know and I’d fly out to assist in any way I can. Well he cashed in, but I think I ended up with the better end of the deal. While I won’t go in to detail on the script or story, I will say that the experience was one of the most inspiring and fruitful I’ve had in the industry. With a limited budget, he called in favors from a fantastic crew that really set the standard for professionalism and talent.

The shoot consisted of a full day and a half day and two locations. The full day took place at a residential home in Arlington and consisted of 4 scenes. A ‘oner’ or long take of sorts, that required lighting and cues to be spot on as the camera moved from the cul-de-sac into the home and set the scene for the remaining interior shots. Master, singles, and reverses followed of the various cast members and Alicia tossed me the slate so I could get some time as 2nd AC. After lunch was called the story moved outside again as two of the characters had some dialogue before getting into a car and then the real fun stuff, driving in the car. The latter requiring a a swap from the Black Magic Design Ursa Mini Pro to its little brother the Pocket Cinema Camera 4k in order to lighten the load on the hood rig. We placed a 4×4 solid over top of the whole rig to cut reflections.

Day 2 took place at the medical training wing of the University of North Texas Health Science Center. This location along with some amazing location liaisons that manage the training area made this the ideal location for a medical/trauma scene. They have access to moulage, training mannequins, faux medical equipment, as well as alarms and sounds for the wild track. 25+ students of the school were recruited to serve as extra’s for the day consisting of injured patients, doctors, and nurses. This day’s shot list also consisted of a oner and then some various angles and inserts of the final scene. All in all it was a quick one, but gave me some good time running as 2nd AD, directing and placing various extras during the long take.

I can’t thank Greg enough for this experience. It was a great time and lots was learned!